Connect to the Web for Data and Design

The HTTP module provides support for variable pictures and other assets that can be referenced via a URL reference (ex: http://www.yourwebsite.com/images/imagename.jpg). Images can be stored on any server or storage location accessible via HTTP, and every image format supported by Adobe InDesign can be referenced in this same fashion.

When the module is installed, DesignMerge software recognizes URL references in the data file being merged (the references must start with “http”), and automatically downloads the referenced files to a temporary cache location. Once downloaded, the image is instantly merged into the page just like any other locally-referenced variable asset. URL references are supported by all DesignMerge Pro functions, including the Data Preview and VDP Packager features.

References to URL images are also fully supported by the DesignMerge Pro preflight feature. When you run a preflight session, the software will check the availability of all URL referenced images, and provide the status in the report. Image files that have already been downloaded into the local cache will be identified in the preflight list, as well as any URL images that may be missing. If you wish to pre-download a local copy of any URL files, the preflight collect feature takes care of that automatically. 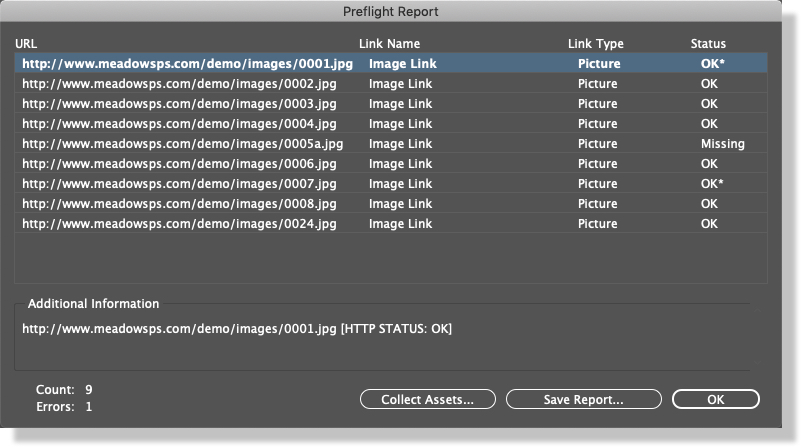 Using the new Rules module Submit HTTP Action, you can easily craft custom queries that can generate variable graphics on-the-fly. For example, imagine a custom maps scenario where the map coordinates are contained in database fields. Create an HTTP query to the map API online, swap in the map coordinates using the DesignMerge Pro Embedded Link feature, and submit the query. The resulting URL will be to a custom map file that will be merged by DesignMerge Pro software immediately. Cool.

In addition to URL-based image support, the HTTP module also provides direct database connectivity for DesignMerge Catalog users. Rather than work through an intermediate CSV data file, for example, the HTTP module can permit direct updating of documents by connecting to an external database system. In this scenario, the user constructs a set of shared queries  (known as HTTP Fragments) that can be associated with any Variable Link in the document. Each HTTP Fragment includes one or more replaceable parameters, that are swapped with data taken from the record being processed before the query is submitted.

During a document update event, each of these query fragments are directed to a server-side processing application accessible via HTTP, and the data returned from the query is instantly merged into the document. Each Variable link defined in the document may be associated with a different HTTP Fragment, and a full set of Replaceable Parameters are available, which allow you to craft generic HTTP fragments that can be used for different link types.

If you need to support URL references to variable assets for DesignMerge Pro, or if you prefer to connect directly to an external data file with DesignMerge Catalog, then the HTTP module is a fantastic add-on solution.