Advanced VDP publishing and composition engine for server-based applications
DesignMerge Server is a version of DesignMerge Pro variable data software that has been developed for use with Adobe InDesign Server. The software is designed specifically for system integrators and solution developers who want to implement rich, robust variable data and automated document assembly workflows using Adobe InDesign as the primary publishing engine.

To use the system, documents are first prepared using DesignMerge Pro on a desktop workstation. All of the features of DesignMerge Pro are fully supported, including automatic copy-fitting, conditional logic, multi-up layout support, Linear and 2D bar coding support, and more. Once documents have been tagged using DesignMerge Pro, they are uploaded to the DesignMerge Server system. Then, using the provided DesignMerge Server interface, a system can be designed to select a template, upload a data file, generate personalized PDF or JPEG proofs, or start a full variable data output session. The final output files, whether JPEG preview or final PDF files, look just like they were printed straight out of Adobe InDesign – because they were!

What it is Not

Although it would be natural to assume that a product named DesignMerge Server would provide a shared/server version of our desktop DesignMerge Pro software, that is not the case. For example, DesignMerge Server does not provide a way for multiple desktop users to access and share their desktop version of Adobe InDesign and DesignMerge Pro. It also does not provide a shared pool of available DesignMege Pro licenses that users can access on demand. So what does it do? Well, DesignMerge Server is a product that does all of the same work as DesignMerge Pro, except it does not provide any user interface, and is designed to function behind the scenes, just like Adobe InDesign Server. In this respect, the system functions like a black box — data is sent in via a request or a script, and a fully personalized document, PDF file, or preview graphic comes out the other side. In order to work with DesignMerge Server, you really must have an automated system in place (Web-to-Print system, Enfocus Switch workflow, custom script, etc) that is set up to control DesignMerge automatically. If this is all still a bit foggy, just run it by your local nerd, or feel free to give us a call.

The DesignMerge Server system is versatile enough to permit one-off personalization of individual documents in a Web-to-Print environment (e.g. a personalized sell-sheet, business card, etc), or can be scaled easily to accommodate VDP print runs with thousands of variable records. Licensing options are also available for local intranet applications, such as our workflow automation integration with Enfocus Switch.

Other web-based composition systems require conversion of InDesign templates into XML or some other proprietary file format. With such systems, it is inevitable that layout integrity becomes lost in translation, which often results in inconsistent output that may require significant post-conversion tweaking. With DesignMerge Server, all of the templates remain in InDesign document format, which means that template preparation is a breeze, and you can be sure that the output will be fast, consistent and predictable.

DesignMerge Server was designed as a modular system that is completely scriptable and very easy to integrate into virtually any web project. If you are dreaming of a magical “black box” capable of handling all of the variable composition needs for your web project, with the output quality and composition features only achievable with a software product like Adobe InDesign, then DesignMerge Server is the perfect choice! 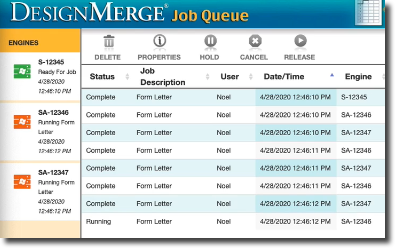 This video presents a brief overview of the DesignMerge Server and DesignMerge queue software in action. If you would like to arrange for a personalized demonstration, please submit your request at the bottom of this web page, or click here.

What can you do with DesignMerge Server?

DesignMerge Server can be used on the back end of any Web-to-Print system to quickly generate live, personalized document previews, or final PDF output. Integration with DesignMerge Queue provides easy HTTP access, along with load balancing features for the best possible performance.

If you are interested in seeing DesignMerge Server presented live and in person, please click the button below to submit your request and we will contact you soon.